XRE4S is a multidisciplinary and transversal ecosystem that gathers the expertise in the energy field on the main universities and research centers in Catalonia. The main goal is to promote the technology transfer and valorisation of energy technologies to industry and society. Actually, XRE4S involves 39 research groups in 14 academia centers with more than 500 researchers. This project is co-financed by the European Regional Development Fund of the European Union in the framework of the ERDF.

DiMoCat group is an interdisciplinary group of research of the IQCC of the University of Girona led by Prof. Miquel Solà and Prof. Anna Roglans. The DIMOCAT has a theoretical and computational section and another section devoted to experimental work. Actually, the DiMoCat group is constituted by 30 researchers: 2 full professors, 1 emeritus, 6 associate professors, 4 post-docs and 17 PhD students. One of the main research lines is: research into perovskite solar panels as environmental alternative to silicon solar panels due to their low cost, and being lighter and more flexible. DIMOCAT wants to research in renewable energy as one of the greatest challenges facing humanity in the fight against climate change. Now, University of Girona has 4 groups in the XRE4S (LEQUIA, eXiT, GREFEMA and DIMOCAT).

On 12th January 2022, Prof. Dr. Oscar Jiménez-Halla of the University of Guanajuato has been promoted to the highest research level in Mexico, the so-called “Investigador Nacional Nivel III”, for his leadership in the academic community of the country, as well as for his participation in the formation of the scientific community.
Congratulations Oscar! We are proud of you!! 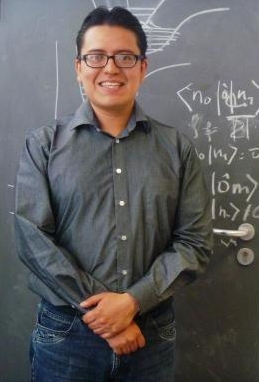 In this work, we describe the formation of supramolecular complexes between fullerene C60 and a molecular nanographene endowed with both positive and negative curvatures. The presence of a corannulene moiety and the saddle shape of the molecular nanographene allows the formation of complexes with 1:1, 1:2, and 2:1 stoichiometries. The association constants for the three possible supramolecular complexes are determined by 1H NMR titration. Furthermore, the stability of the three complexes is calculated by theoretical methods that also predict the photoinduced electron transfer from the curved nanographene to the electron acceptor fullerene C60. Time-resolved transient absorption measurements on the ns-time scale shows that the addition of C60 to nanographene solutions and photo-exciting them at 460 nm lead to the solvent-dependent formation of new species, in particular the formation of one-electron reduced form of C60 in benzonitrile is observed.

The work has been done in collaboration with the groups of Prof. Nazario Martín who synthesized the nanographene and the complexes and Prof. Dirk Guldi who performed the time-resolved transient absorption measurements. Calculations were performed in the DiMoCat group by Dr. Anton Stasyuk, Prof. Alexander Voityuk and Prof. Miquel Solà.

The paper can be read in Angew. Chem. journal through the following link:

The editor classified the paper as a hot paper!

On 19th June 2021, Karolina Urbanowicz started a visit of six weeks to the DiMoCat group financed by HPC-Europa3. The research project of Karolina, which is supervised by Dr. Antony J. Stasyuk and Prof. Miquel Solà, is primarily aimed at the investigation of conformational-property landscape in triplet photosensitizers derived from metal-free organoboron complexes with semi-rigid spiro architecture and boron atom separating donor and acceptor parts of the molecule. These systems are very effective photocatalysts in the oxidation reactions mediated by singlet oxygen. We expect that understanding of their nature will lead to new opening in the field of metal-free photosensitizers with potent application in catalysis, photodynamic therapy or cancer treatment and antimicrobial photodynamic therapy.

We wish Karolina good luck and great successes in her project!

From left to right, Karolina, Anton and Miquel in the IQCC.

Aromaticity in macrocycles has been less studied than aromaticity in small polycyclic aromatic hydrocarbons (PAHs). In the work carried out by Dr. Álvaro Muñoz Castro from the Grupo de Química Inorgánica y Materiales Moleculares of the Universidad Autónoma de Chile and by Sílvia Escayola, Dr. Albert Poater, and Prof. Miquel Solà from the DiMoCat group of the Institute of Computational Chemistry and Catalysis of the University of Girona, the authors analyze the most efficient circuits for π-delocalization in a grossly warped nanographene (C80H30), containing five- and seven-membered rings inserted into a six-membered mesh. DFT calculations of different aromaticity indices (FLU, HOMA, EDDB, and ring currents) indicate that one of the two most favorable circuits for π-electron delocalization formally has 50 π-electrons abiding by Hückel’s rule, whereas the second one formally has 75 π-electrons and, remarkably, it does not follow any of the known rules of aromaticity. The nanographene studied display both local aromaticity in the external six-membered rings and macrocyclic aromaticity in the 50 amd 75 π-electrons circuit. This is the first time that a π-electronic circuit has an odd number of electrons, and also that the circuit involves cross-conjugated pathways (ie they do not have alternating single and double bonds).

This finding has been highlighted by Chemistry World, as can be seen in the following link. 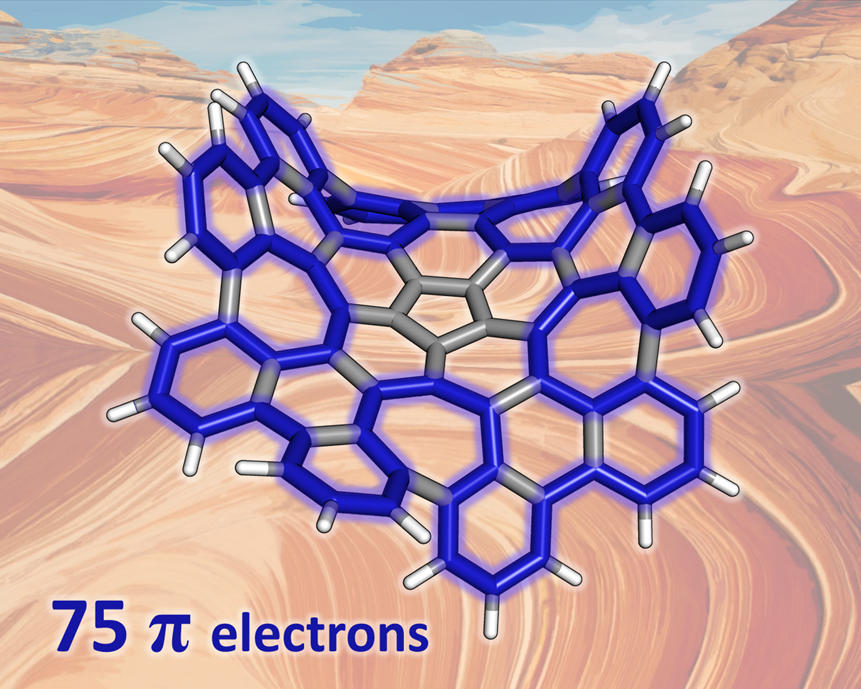 A recent paper (Kim et al. Nature Commun. 2019, 10, 4983) claims that there is a double charge transfer in the first singlet excited singlet state in TMTQ (an oligomer composed of a central 1,6-methano[10]annulenes, M10A, and 5-diacyanomethyl-thiophene exocyclic groups, see Figure 1) that is stabilized by the Baird aromaticity acquired by the central M10A ring. In a previous work (Jorner et al. Chem. Eur. J. 2016, 22, 2793), some of us found that the charge transfer in the first excited singlet and triplet states in TMTQ is minor and that the central ring in these low-lying excited states is a Hückel-Baird hybrid with a ca. 85% of Hückel and 15% of Baird character. In the light of the new existing experimental data, Claire Tonnelé and Prof. Henrik Ottosson of the Uppsala University, Dr. David Casanova and Dr. Eduard Matito of the Donostia International Physics Center (previous DiMoCat member), and Sílvia Escayola, Dr. Albert Poater, and Prof. Miquel Solà members of the DiMoCat group of the Institute of Computational Chemistry and Catalysis of the University of Girona decided to reinvestigate the problem using (time-dependent) density functional theory methods. We considered not only TMTQ but also a series of symmetrically substituted conjugated rings that can generate Baird aromaticity in the lowest-lying excited states. This work shows that the interpretation by Kim et al. needs to be revised because low-lying excitations of symmetrically substituted conjugated rings including TMTQ hold very weak charge transfer character. Our computational results also allow us to establish general guidelines for the rational design of molecules with excited state Hückel/Baird aromaticity in pro-aromatic quinoidal compounds We found that high Baird character of the central ring is achieved only with anionic and small conjugated central rings with electron donating groups as substituents and small exocyclic groups with electron withdrawing substituents. Our study aims to warn about the need to make correct interpretations of the experiments in this growing area of research, as only then can the excited state aromaticity concept develop in a useful tool for the design of high-performance organic electronic devices.

Figure 1. Quinoidal, diradical, and ionic resonance structures of importance for TMTQ (10R-T) involved in the description of S0, S1, and T1 states.

At the beginning of November 2021, Gibu George joined the DiMoCat group as a PhD researcher in training with a FI-SDUR fellowship financed by the Generalitat de Catalunya. During his PhD, he will be working on charge transfer processes with a focus to fullerene donor/acceptor dyads and fullerene:perovskite hybrid solar cells. His work will be supervised by Prof. Miquel Solà and Dr. Antony Stasyuk.

Gibu George (1996) obtained his B.Sc. in Chemistry in 2017 and his M.Sc. in Pharmaceutical Chemistry in 2019, both at Mahatma Gandhi University (India). During his master’s, he worked under the supervision of Dr. Jayasree E.G at the University of Kerala (India). After that, he moved to Cochin University of Science and Technology (India) for about 3 months to work with Dr. Susmita De.

Because of the COVID-19 pandemic, it has not been easy for Gibu to get the visa (Spanish embassy was closed) and the flight to come to Girona. Fortunately, finally was able to get the visa and he joined our group on 2nd November 2020. We wish him good luck with his PhD!

The FRONT COVER of issue number 83 of volume 56 refers to the recently published article “All-metal Baird aromaticity”. The work has been carried out by Prof. Jun Zhu at the University of Xiamen and Dandan Chen, Dr. Dariusz W. Szczepanik, and Prof. Miquel Solà members of the DiMoCat group of the Institute of Computational Chemistry and Catalysis of the University of Girona. The cover is the result of the artistic inspiration of Dandan Chen. The paper has been highlighted by ChemistryWorld. Inthe same issue, others members of DiMoCat have published another paper entitled “Photoinduced electron transfer in nanotube⊃C70 inclusion complexes: phenine vs. nanographene nanotubes“.

Whereas the aromaticity of closo boranes is widely accepted, less is known about the aromaticity of nido boranes. This work carried out by Prof. Francesc Teixidor, Prof. Clara Viñas, and Dr. Ines Bennour of the Institute of Materials Science of Barcelona (ICMAB-CSIC), Prof. Jordi Poater at the University of Barcelona (previous DiMoCat member) and Sílvia Escayola and Prof. Miquel Solà members of the DiMoCat group of the Institute of Computational Chemistry and Catalysis of the University of Girona, experimentally shows that deboronation of m-C2B9H12 is a difficult task, whereas deboranation of o-C2B9H12 is quite easy. Moreover, it is widely known that o-C2B10H12 isomerizes to m-C2B10H12 upon heating at 400 ºC. These two facts indicate that m-C2B10H12 is more stable than o-C2B10H12. To find a reason for the different stability of these two isomers, authors have analyzed the thermodynamic stability and aromaticity of these closo carboranes and their nido counterparts. Results show that the higher thermodynamic stability of m-C2B10H12 is not related to aromaticity differences but to the location of the C atoms in the carborane structure. It is also demonstrated that the aromaticity observed in closo boranes and carboranes is also present in their nido counterparts and, consequently, authors conclude that aromaticity in boron clusters survives radical structural changes. Further, sandwich metallocenes (e.g. ferrocene) and sandwich metallacarboranes (e.g. [Co(C2B9H11)2]–) have traditionally been considered similar. In this work, it is shown that they are not. Metallacarboranes display global aromaticity, whereas metallocenes present local aromaticity in the ligands. Remarkable and unique is the double probe given by 1H- and 11B-NMR tracing the reciprocally antipodal endocyclic open face Hec and B1. These magnetic studies have permitted to correlate both nuclei and relate them to a diatropic current in the plane at the middle of the nido-[C2B9H12]–. This observation is the first and unique data that proves experimentally the existence of diatropic currents, thence aromaticity, in nido clusters and is comparable to the existence of diatropic currents in planar aromatic compounds.

Financial support: This work has been supported by the Ministerio de Economía y Competitividad (MINECO) of Spain (Projects CTQ2017-85341-P, CTQ2016-77558-R, and MDM-2017-0767) and the Generalitat de Catalunya (projects 2017SGR39 and 2017SGR348). Excellent service by the Supercomputer center of the Consorci de Serveis Universitaris de Catalunya (CSUC) is gratefully acknowledged.

ICREA announced the list of winners of the ICREA Acadèmia awards 2019, among which are three (!!!) names from the University of Girona: Sebastià Puig (Engineering), Anna Company and Albert Poater (both IQCC and Chemistry). Albert Poater belongs to DIMOCAT group.